A couple of months back a good friend, Arjun, sent me an email. He wrote passionately about something called the Yorkshire Three Peaks challenge – 24miles of hiking to be done over about a 12 hour timeframe. It was a call to action. Though I probably hadn’t walked 10miles in one stretch prior to the challenge I was game – I could see vicariously through my sister’s experience of trekking about Peru the transformational power it had had on her.

Two days before the hike Zoe, a compassionate colleague, grabbed me by the scruff of the neck and made sure I had the right gear and clothing.

Along the way we met many interesting people, several of who were in our group. Discussion ranging from how people like their porridge in the morning to personal and spiritual development ensued. Dr Emma, if you read this please post a link to your conference talks. 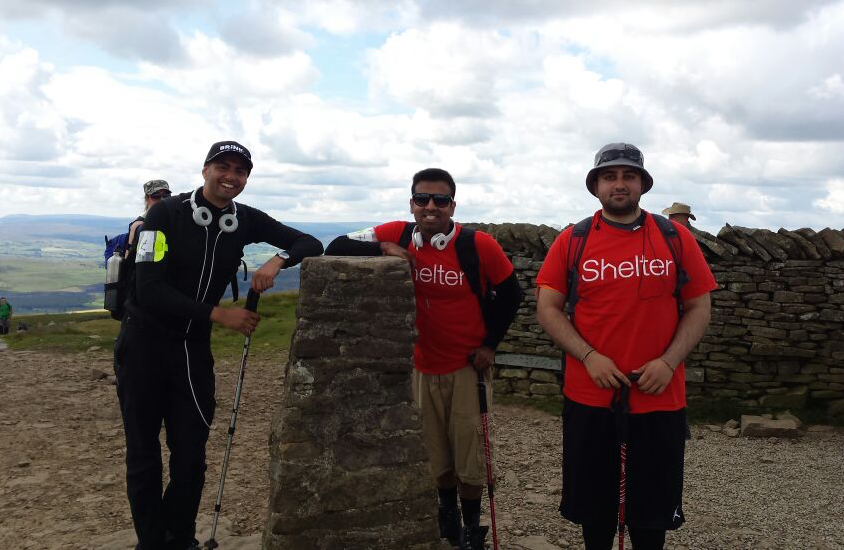 About 14miles into the hike I approached an open lush green flat expanse. On either side of the path I walked were goats – no more than a foot or two away. They grazed peacefully whilst their offspring played about them. I smiled and the smile stayed. Without a spoken word I greeted the goats, and they welcomed me. I greeted the earth and it shone a vivid light green. The clear air brushed itself alongside me to make its presence felt, much like a hug from an old friend. The presence in that moment moved me to tears.

After reaching the third and final peak, about 20miles in, I sat down and rested for 15minutes whilst the group caught up. My muscles cooled and when it came time to make the final leg of the journey I began feeling a sharp pain on the outside of my right knee when I stepped with my right leg. I became heavily reliant on the walking stick and my pace slowed considerably, as was the case with my friend Prit. The rest of the group descended the final peak and before long they were out of sight. The descent looked treacherous; a steep downward route on uneven footing. As I stared at the route toward flat land, I caught myself thinking one wrong step and I’m rolling. However, there was no other choice; nobody else could take the footsteps I had to tread so that’s what I did. I focussed on each step, as if it were the only step. After taking several steps, I would look up to figure out the path to take but carry onto the next step before the reality of the situation was clouded by thought.

Having finally reached the bottom of the descent the flat path seemed to go on without end, my group was nowhere in sight. I thought about the story of Sisyphus and how a man condemned to roll a boulder up a hill to watch it roll down for eternity can find meaning in life. As I limped up a one way road, I saw a sheep stood on the wrong side of the gate. I approached the gate and the sheep stepped back. I unlocked the gate and pulled, it wouldn’t open, so I pulled harder until the earth beneath it surrendered. I looked at the sheep and before I could gesture it to get back inside, it rebelled and shot off down the road. I pushed the gate once, and then twice, it closed, and again I was reminded of Sisyphus.

Taking the final few steps I saw my group, group number 7, hugging and congratulating each other. I joined them.