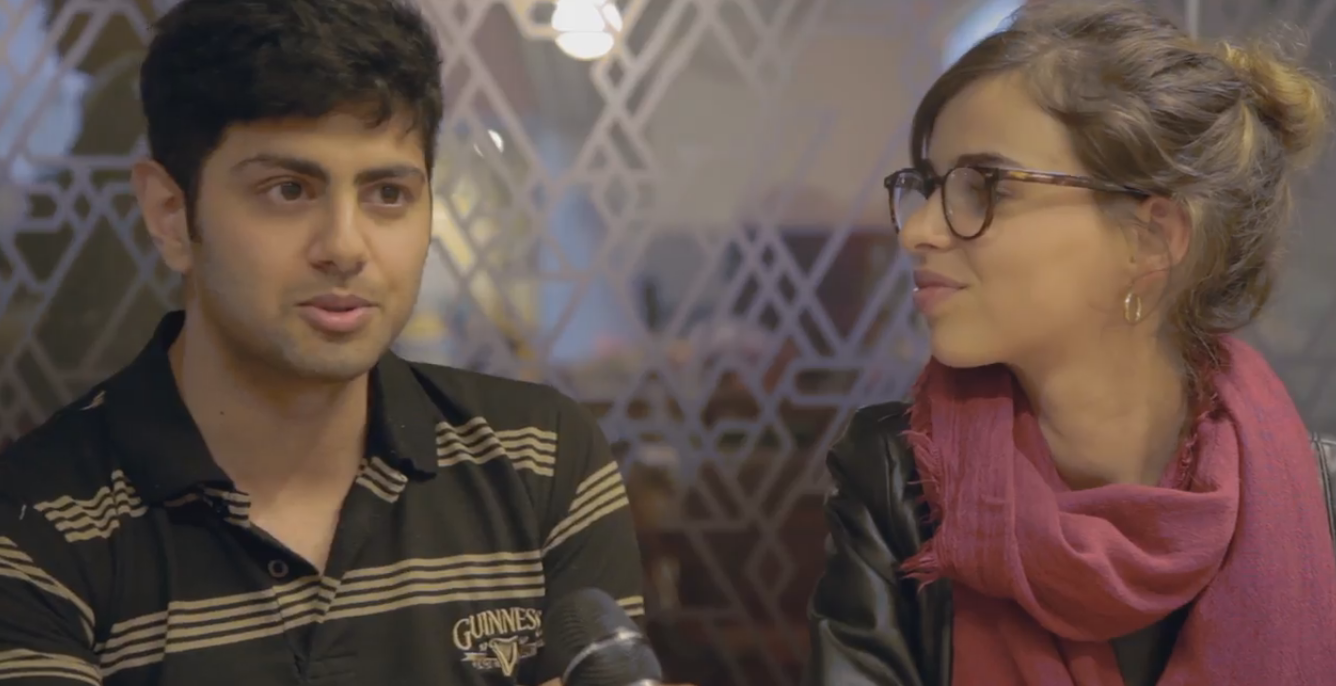 It’s been several months since I wrote my last post. Since then I’ve moved back to London and hunkered down developing grraft, the mentorship platform for professionals. This post will wrap around grraft and lifestyle in general.

Let’s start with a couple of stories. Story 1: Speed Mentoring

On my birthday I went to a Speed Mentoring session. Mentees (here, first time startup founders or folks thinking about starting a business) sat with mentors (entrepreneurs and folks offering help to startups) to pick their brains in 5 minute bursts. By the end of it, mentees would have had to share their idea dozens of times making it a good chance to practice the elevator pitch. It was a blast and there were key takeaways.

To clarify, grraft is a platform to find your mentors and mentees, meet face to face to address the sticking points in professional life and grow as a result.

Here’s a video snapshot of the event:

Check out our video from the Speed #Mentoring for #Startups event we held last week. #success #entrepreneur #SME pic.twitter.com/ZKQVb3PJrw

After the session I was in state/on a high, the pint or so may have contributed. Sat on the train going home I pulled out my laptop and squinted at my React components. The chap seated to my left pulled out his laptop, he was working on the React TodoMVC starter project. We quickly became buddies and I showed him how I do my styling and the results on grraft. It was an instant mentorship session. We got to talking about grraft in general (as I was warmed up) and the chap to my right takes out his in-ear headphones and says he’s interested. I gave him the grand tour and he told me his father’s an investor and may be interested. We just about had enough time to exchange contact details before they hopped off at the next stop. I later met up with him in Camden and we had an interesting chat about the state of technology, his aspirations, how he could do with a mentor in commercial property, and financials. He asked what was size of the market grraft is in? Despite having a degree in Economics, I hadn’t thought that through. On the fly, I estimated somewhere in the region of $20m. Why $20m? Well that’s what MeetUp.com (great site) generated in revenues for 2015. While grraft is different to MeetUp in fundamental ways (grraft is focussed around professionals, smaller sessions, people are the brand instead of a group being the brand, etc.), the subscription based business models are similar and I reckon it’ll attract similar types of people. I was also asked what are the running costs for the next year or so. I said ‘not much’. I recall hearing on Stanford’s/Y-Combinator’s How To Start A Startup podcast that you should only consider hiring if you’re working 120+ hours/week. I work at tops 80 hrs, and frequently less when Deep Work is involved. The infrastructure cost isn’t high as it’s rented from Heroku (a great service by the way, the only gripe I have is the cost of an extra $20/month for its SSL endpoint).

I’m using Stripe to handle payments made in grraft e.g. mentees paying mentors for a session, mentors upgrading their subscription, etc. I chose Stripe as it allows market places to be created; customers transacting with each other. So Stripe held a UK launch party for their Managed Accounts feature, I went.

Well, I got lost at first. Walking past the rows and rows of glass walled rooms housing early stage startups in Shoreditch. I peered in, like an uncool kid looking at the cool kids. Eventually I found my way to Stripe’s offices. With about a hundred folks networking, the hum of clever chatter was really loud. People were really friendly, approachable, and wanted to know and share their own story. My lack of experience in networking events bubbled pretty quickly in amusing ways; I was asked ‘where are you from?’, I replied ‘North London’, only to be met by ‘Oh, I meant which startup’. I got talking with the tech lead of a startup, I wanted to know everything about how things work in a startup so I asked him about recruiting developers (level of experience required, backgrounds, foo buzz), setting direction for the team, making decisions on architecture, deployment, and everything in between. We probably spoke for about 2-3 hours, he was keen for me to interview for a developer role at his startup. What I took away from this experience is the importance of embodying what you express; if you want to get a job as a developer, become the developer before you’re given the title – walk, talk, and think like one, even if you’re rough around the edges.

I use Heroku to host grraft. Heroku sits on top of Amazon Web Services. It’s developer friendly – abstracting away infrastructure complexity to the point where you can deploy with a one line git push. AWS held their annual summit at the excel centre in docklands and I decided to go.

About 5,000 people turned up; it was massive. Sitting down to listen to the CTO’s keynote, their entrance music shook everybody awake. They had their customer’s come on stage and show how they use AWS to solve their problems, that was cool.

I met this one guy who wanted to get into politics, while simultaneously into rapping and being into the grime game. I think he was a little drunk, or maybe I was.

They had hands on labs which were cool where I setup an S3 bucket and pushed data to it/consumed it.

Ultimately I got the feeling that infrastructure (DevOps) isn’t straight forward; understanding how to setup and configure (micro/nano) services needs clear thinking. I also gained a tonne of confidence in AWS; the companies which are built on it, the evolution cloud computing has undergone – from monolithic stacks to micro services and serverless architectures. Perhaps that sounds like a paradox but paraphrasing Niels Bohr, the opposite of a great truth may also be a great truth.

Most of grraft’s features have been built; from registering (using your LinkedIn profile), finding mentors (as shown below, though its subject to change), messaging folks, and creating and joining mentorship sessions. 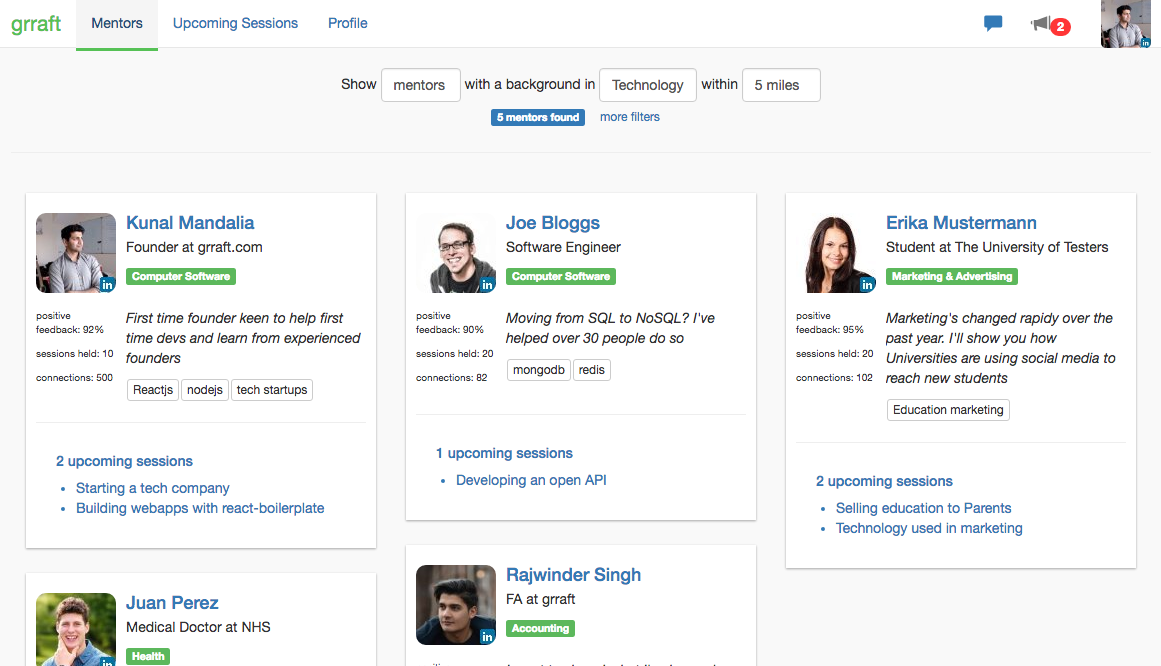 What remains is to integrate with Stripe; handle payments from mentors to grraft (subscriptions) and from mentees to mentors. Before I started working on grraft I created a demo app to handle payments as it was the greatest unknown. Matthew Arkin helped me a lot on Stripe’s freenode channel, he’s awesome and was helping people for the fun of it, no wonder BrainTree hired him. A couple other features will need to be built too; session attendance to show the mentor who’s checked in and present (and paid), etc. I estimate all of this will be an extra couple of months (that’s my goto phrase – I’m pretty poor at defining deadlines, partly because the technical unknown’s have to be waded through and I haven’t worn those Wellingtons before).

When these final features are in and tested, I’ll be approaching larger organisations. Initially I imagined approaching professionals on the street and persuading folks to signup one by one, I’ll still do that but I think that’s the 20%, not the 80%. Focussing on large organisations (public health, banking, etc.) should prove to be much more effective; if an organisation can point their staff to grraft (by way of an internal email largely written by me specifically for their business) then the folks joining grraft will see the type of people they want to engage with; colleagues up and down the organisation with varying levels of experience, skills, and interests. It’s a win for the organisation as their staff can easily engage in mentorship among themselves without the organisation needing to manage or maintain the process. It’s a win for the organisation’s staff as they can tackle professional pain points which slow their growth, broaden and deepen their network and relationships which builds trust. It’s a win for grraft as the new users add value to the entire grraft community.

I’ve learned a few things along the way, I’ll get technical here. Note the stack I’m building on is Node.js/Express on the backend and React/Redux/ES6/Babel/Webpack etc. on the frontend. First, the React Ecosystem (data flow, routing, async, etc.) has lots of moving parts, at least that’s how it feels at the beginning. I use React-Boilerplate to connect the moving parts. In learning the starter project, I asked many stupid (or what look stupid in hindsight) questions, came across some bugs and even made my first open source contribution to the repo (that was a big moment, Travis CI broke but the code was fine, rerun and the commit went through). While managing state the Redux way can seem like a lot of work, understanding what your app is doing and why is great, I’ve always got Redux DevTools open in Chrome showing the actions dispatched. I remember reading Dan Abramov’s Presentational and Container components a while back and its meaning escaped me. One day while splitting a component into its Container element (handles actions, state, etc.) and Component element (presentational, render logic, etc.) those ideas clicked, that felt good. Writing any form of tests has escaped me thus far too; most of the testing has been manually done, I’d love to sit down with a mentor to show me the ropes and apply the principles to my code (and perhaps that’ll impact what code needs refactoring too). Note all bugs relating to grraft are filed openly (except security ones) on github.

Finally I’ll touch on lifestyle to wrap up. My morning routine involves exercising; alternating daily between jogging for 45mins, 100 pushups/crunches, and a 1h walk with resistance training). I feel in better shape as I’ve not been able to run large distances for a decade or so. The afternoons and evenings are for working on grraft. I try to fit about 7-8 quality hours in (which usually involves about 12 hours in front of the laptop) though this can vary; some weeks I’ll be super motivated and others less so. When you’re creating your startup without any funding, how do you hold yourself accountable? I try keeping some objective measures like time scheduled/worked on for given code branches in Google Calendar. Podcasts are still a big part of my day. EconTalk’s a great podcast which has brought back the fundamentals of Economics to the real world (something I feel can get abstracted away in higher education). My last recommendation goes to Jordan Peterson‘s lectures on Meaning and Personality, he goes deep, you’ve been warned.